A conceptual overview of how EAS Update works.

EAS Update is a service that allows you to deliver small bug fixes and updates to your users immediately as you work on your next app store release. Making an update available to builds involves creating a link between a build and an update.

To create a link between a build and an update, we have to make sure the update can run on the build. We also want to make sure we can create a deployment process so that we can expose certain updates to certain builds when we're ready.

To illustrate how builds and updates interact, take a look at the following diagram: 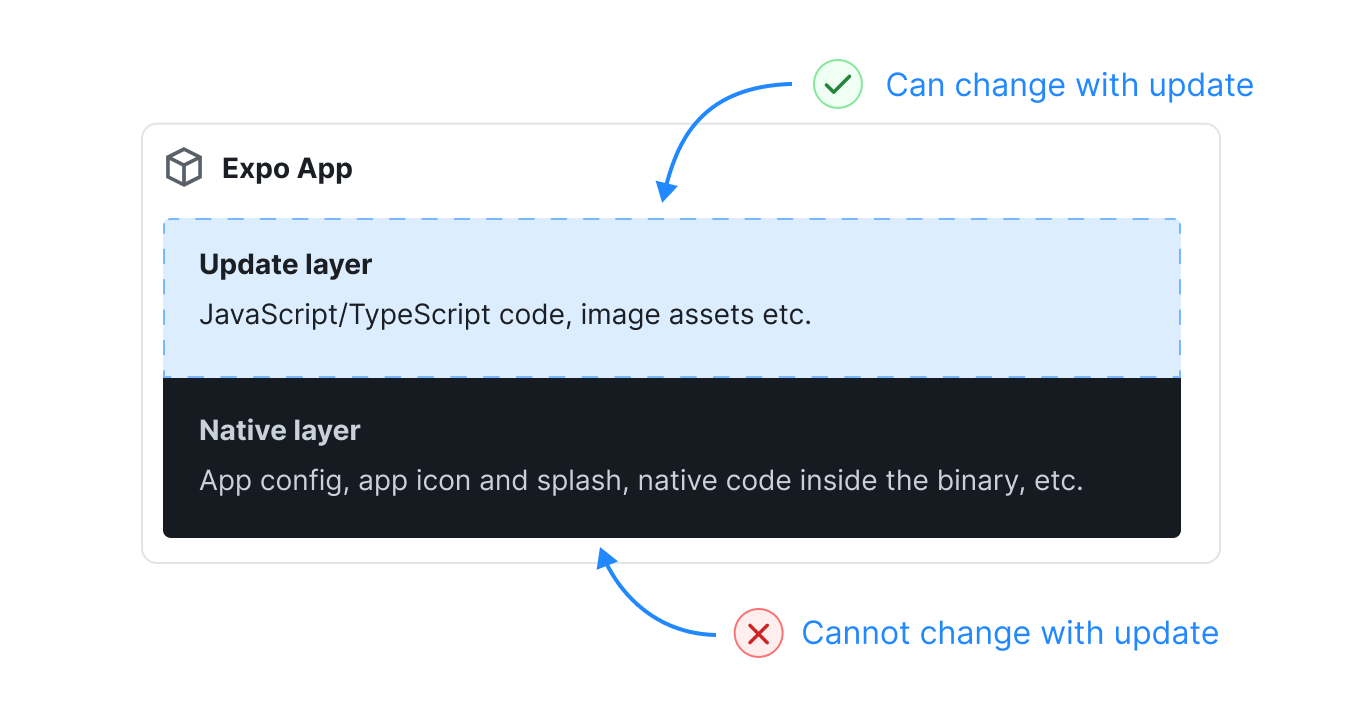 Builds can be thought of as two layers: a native layer that's built into the app's binary, and an update layer, that is swappable with other compatible updates. This separation allows us to ship bug fixes to builds as long as the update with the bug fix can run on the native layer inside the build.

To make sure the update can run on the build, we have to set a variety of properties so that we can be sure our builds can run our updates. This starts when we create a build of our project.

When we're ready to create a build of our Expo project, we can run eas build to create a build. During the build, the process will include some properties inside the build that are important for updates. They are:

If we made two sets of builds with the channels named "staging" and "production", we could distribute builds to four different places: 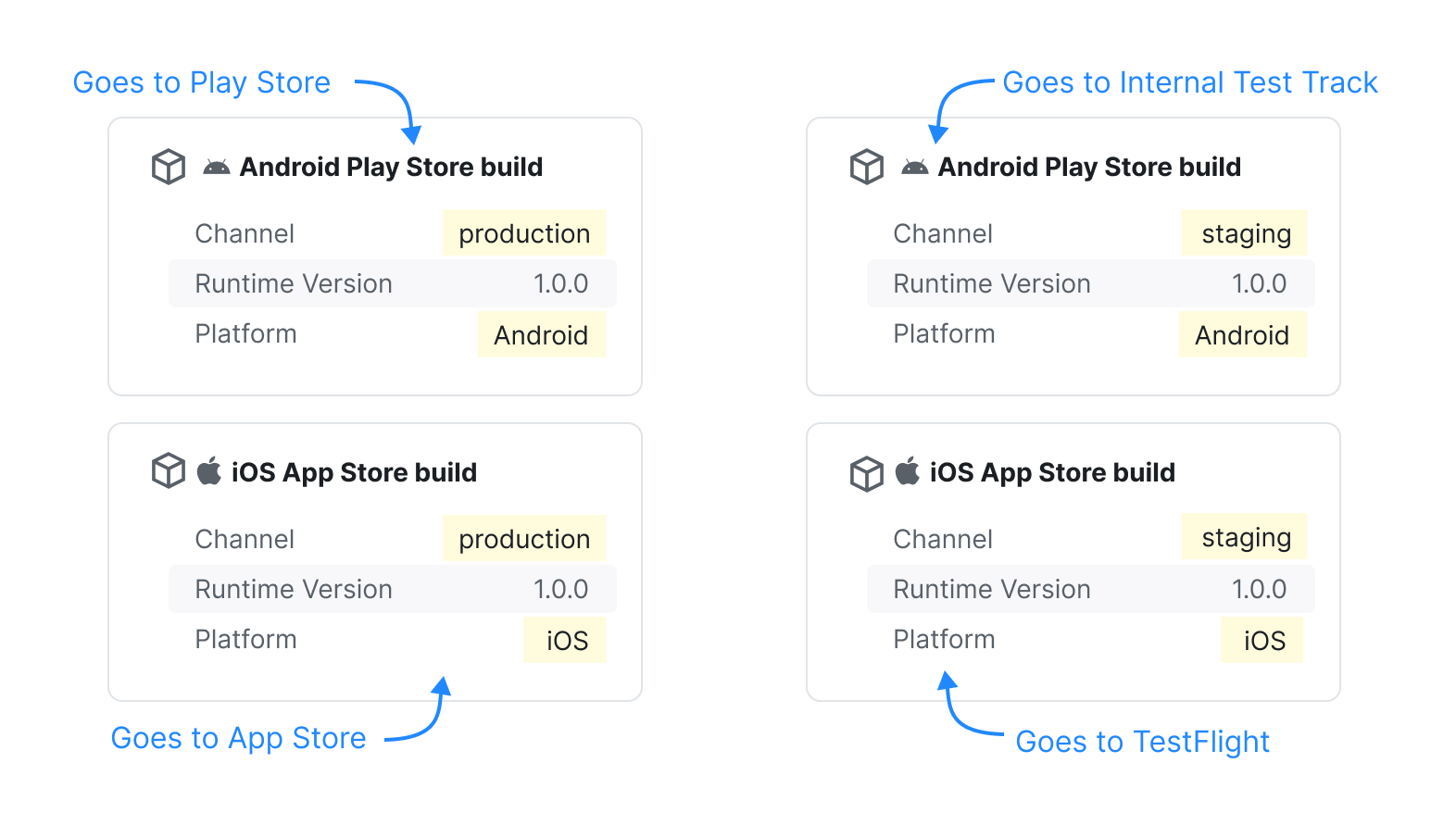 Once we've created builds, we can change the update layer of our project by publishing an update. For example, we could change some text inside App.js, then we could publish that change as an update.

To publish an update, we can run eas update --auto. This command will create a local update bundle inside the ./dist folder in our project. Once it's created an update bundle, it will upload that bundle to EAS' servers, in a database object named a branch. A branch has a name, and contains a list of updates, where the most recent update is the active update on the branch. We can think of EAS branches just like Git branches. Just as Git branches contain a list of commits, EAS branches contain a list of updates.

Like builds, every update on a branch includes a target runtime version and target platform. With these fields, we can make sure that an update will run on a build with something called an update policy. EAS' update policy is as follows:

Let's focus on that last point. Every build has a channel, and we, as developers, can link that channel to any branch, which will make its most recent compatible update available on the branch to the linked channel. To simplify this linking, by default we auto-link channels to branches of the same name. For instance, if we created builds with the channel named "production", we could publish updates to a branch named "production" and our builds would get the updates from the branch named "production", even though we did not manually link anything.

This flow makes it so that we can push to GitHub, then see our builds update without any other interventions. 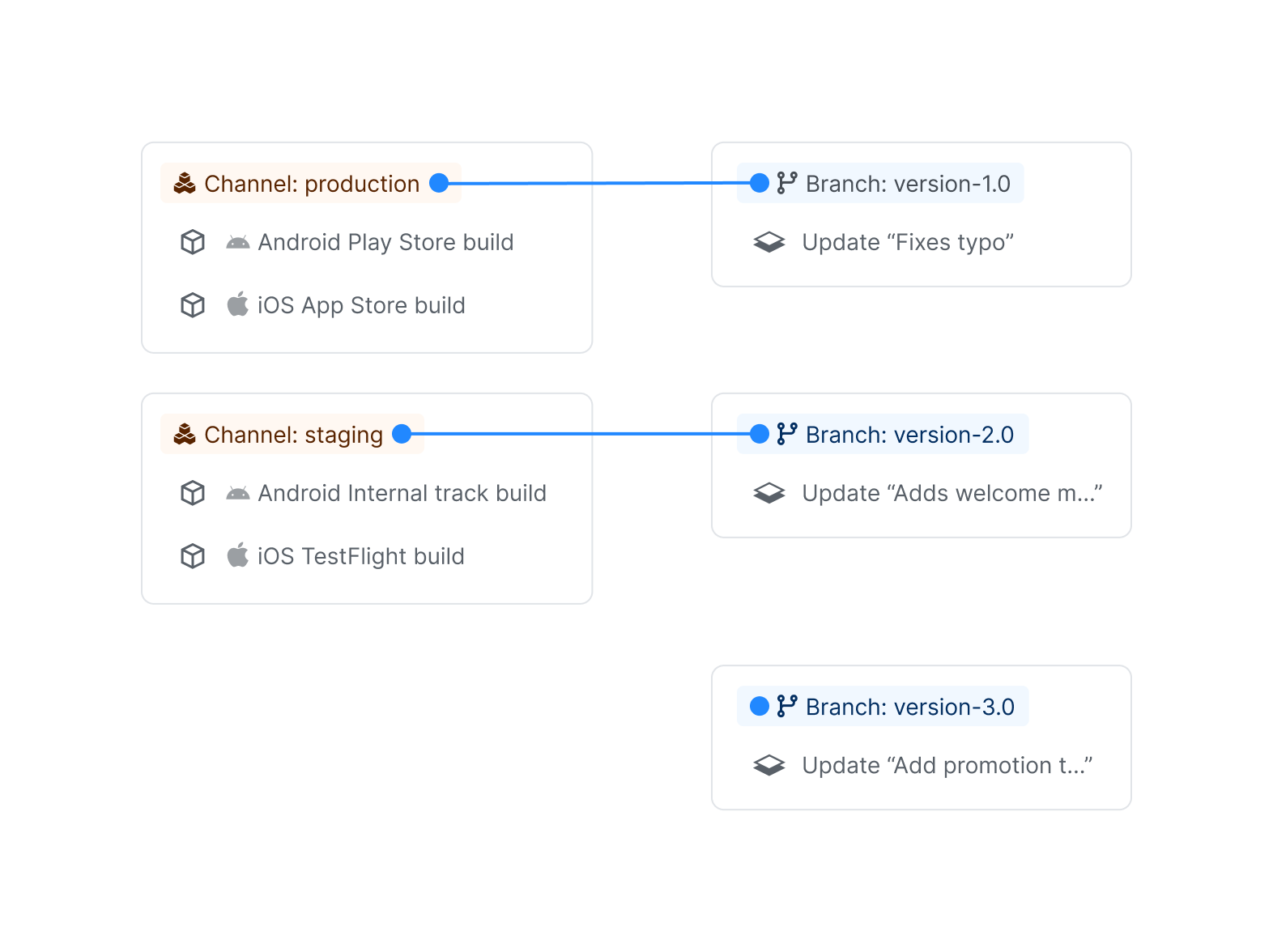 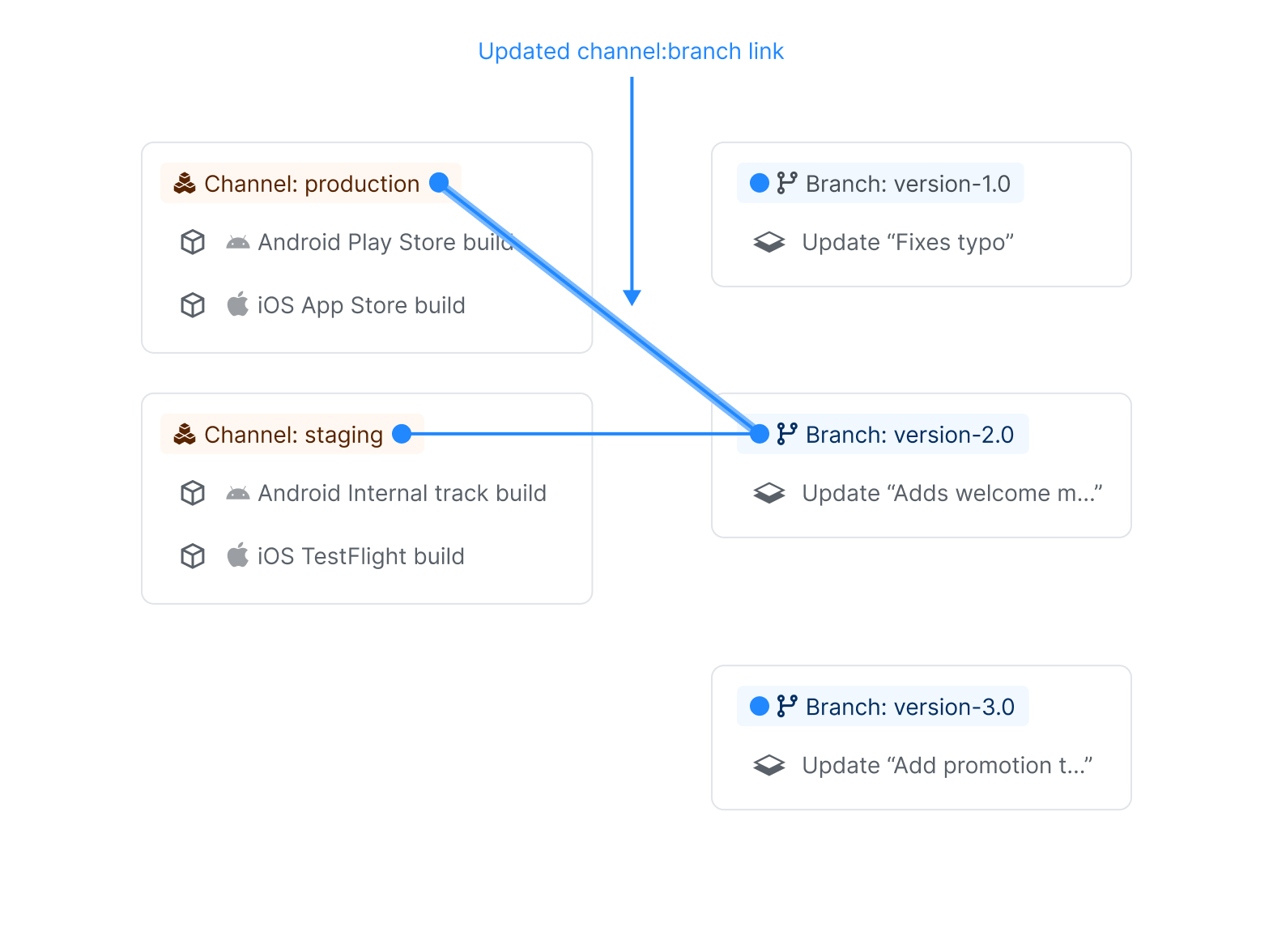 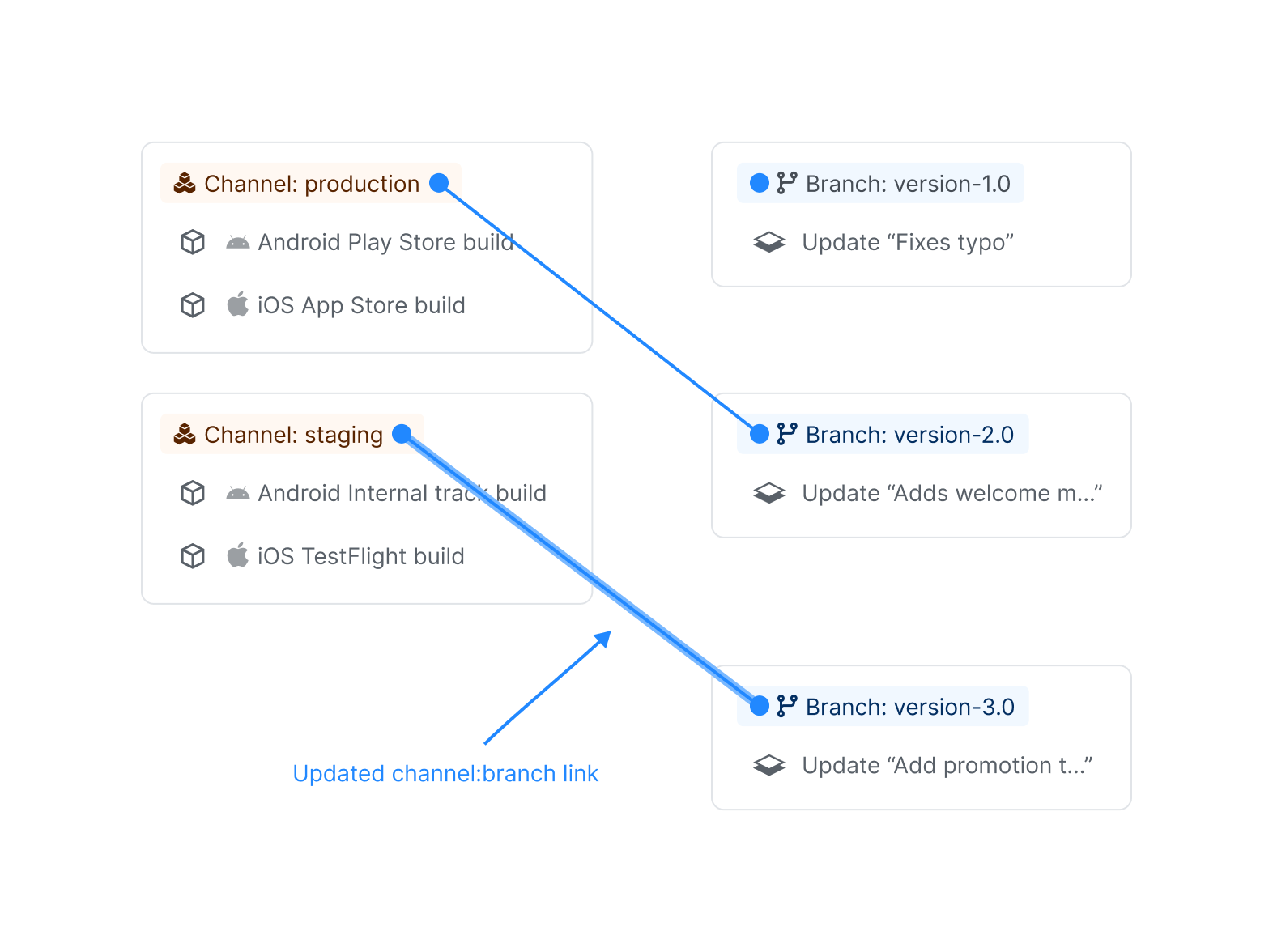 Now that we're familiar with the core concepts of EAS Update, let's talk about how this process occurs.

When an Expo project that includes expo-updates is built the included native Android and iOS code is responsible for managing, fetching, parsing, and validating updates.

When the library checks for updates and when it downloads them is configurable. By default the library will check for an update when it is opened. If an update newer than the current running update is found, it will download and run the newer update. If the library does not find a newer update, it will instead run the newest downloaded update, falling back to the update that was embedded inside the app at build time if none have been downloaded.

expo-updates downloads updates in two phases. First, it downloads the most recent update manifest, which contains information about the update including a list of assets (images, JavaScript bundles, font files, etc...) that are required to run the update. Second, the library downloads the assets specified in the manifest that is has not yet downloaded from prior updates. For instance, if an update contains a new image, the library will download the new image asset before running the update. To help end-users get updates quickly and reliably, updates should be kept as small as possible.

If the library is able to download the manifest (phase 1) and all the required assets (phase 2) before the fallbackToCacheTimeout setting, then the new update will run immediately upon launch. If the library is not able to fetch the manifest and assets within fallbackToCacheTimeout, it will continue to download the new update in the background and will run it upon the next launch.

With EAS Update, we can quickly deliver small, critical bug fixes to our users and give users the best experience possible. This is set up with a build's runtime version, platform, and channel. With these three constraints, we can make an update available to a specific group of builds. This allows us to test our changes before going to production within a deployment process. Depending on how we set up our deployment process, we can optimize for speed. We can also optimize our deployments to be as safe a bug-free as possible. The deployment possibilities are vast and can match nearly any release process you prefer.