Both iOS and Android and most desktop operating systems come with their own set of platform fonts but if you want to inject some more brand personality into your app, a well picked font can go a long way. And since each operating system has its own set of platform fonts, if you want to produce an experience that is consistent for all users, you'll want to use your own fonts in your project. This guide will show you how to do that.

Expo has first-class support for all fonts listed in Google Fonts. To use one of these, check out the Expo Google Fonts project. With these packages you can quickly integrate any font or font variants.
To use the Inter font you can install the @expo-google-fonts/inter package with the command below.
After that, you can integrate this in your project by using the useFonts hook in the root of your app.

A minimal but complete working example

To create a new project including this example, run npx create-react-native-app --template with-custom-font in your terminal.
When you load it on your device, you should see something like this: 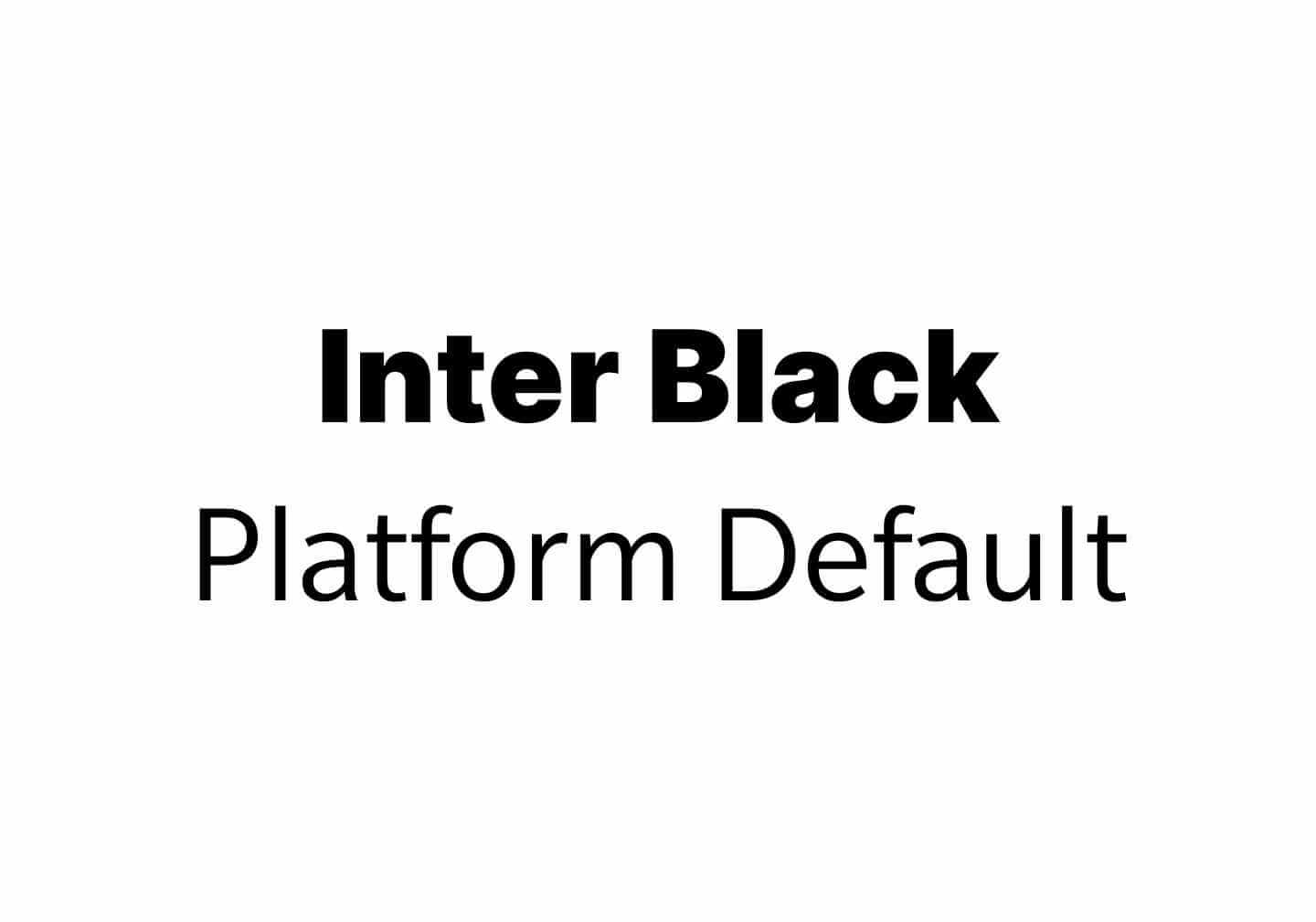 The first thing you'll need is a font file. In this example, we use Inter Black from the free and open source Inter font family by Rasmus Anderson. The convention in Expo apps is to put your fonts in an ./assets/fonts directory, but you can put them anywhere you like.

The two officially supported font formats for the Expo platform are OTF and TTF. You should use one of those formats whenever you can. If your font is in another format, try to convert it to one of those formats.
These are the only font formats that work consistently in Expo across web, Android, and iOS.
If you have both OTF and TTF versions of a font, prefer OTF. OTF is a newer format and .otf files are often smaller than .ttf files and sometimes OTF files will render slightly better in certain contexts. In general, both formats are very similar and perfectly acceptable.

Beyond OTF and TTF

If you need to use another format, you may need to customize the Metro bundler configuration to get anything other than TTF and OTF to work. In general, just don't do that unless you are really sure you want to. Trying to render a font format that a platform doesn't support may in some cases cause your app to crash.
But, for reference, here is a table of which formats work on which platforms.

If you don't want to use a custom font, your best bet is to just use the platform default font by not specifying a font family. Each platform that Expo apps support has a different set of fonts available by default, so there's no good way to specify one that will work everywhere without supplying your own custom font.
If you are curious, Nader Dabit maintains a list of fonts always available on iOS and Android.
And on web, there are a number of generic font families that you can specify. Different users, browsers, and operating systems will be configured to use different fonts for each of these font family specifications. For example, Safari on an iPhone will use San Francisco as its default for sans-serif while Microsoft Edge on Windows will use Arial, and Chrome on Android will typically use Roboto, though OnePlus phones will often use Slate, etc., etc..
In general, your safest bets are just to use the system default which will usually be an easy-to-read sans-serif font that the user of any system should be familiar with; or to use your own custom font so you have precise control over what the user will see.

Since your fonts won't be ready right away, it is generally a good practice to not render anything until the font is ready.
A great way we can do that is to use the <AppLoading /> component. In its simplest form, you can just render it while you're waiting for your app to load.
Sometimes -- particularly on the web -- people choose to render their content in a platform default font while their custom font is loading. Or, alternatively, to render the rest of their content, that doesn't depend on the custom font while the font is loading.
These approaches are called FOUT and FOIT and you can read a lot more about them on the web.
In general, these strategies are not recommended for Expo apps. If you include your fonts in your project, the fonts will always be delivered to the user by the time your code is running. The one exception to this is that you may prefer to do this on the web.

You probably don't need to know anything beyond this point in this guide to use custom fonts effectively in your app, but if you are curious or your use case has not been addressed by the above information, please continue reading.

In general, it's best and safest to load fonts from your local assets. If you submit to app stores, they will be bundled with the download and available immediately. And you don't have to worry about CORS or other potential issues.
But if you want to do it, it is also possible to load a remote font file directly from the web rather than from your project's assets.
To do this, just replace the require('./assets/fonts/MyFont.otf') with the URL of your font.
Here is a minimal, complete example.

⚠️
If loading remote fonts, make sure they are being served from an origin with CORS properly configured If you don't do this, your remote font might not load properly on the web platform.

If you don't want to use the useFonts hook (for example, maybe you prefer class components), you can use Font.loadAsync directly. What is happening under the hood is that your fonts are being loaded using Font.loadAsync from the expo-font library. You can use that directly if you prefer, or if you want to have more fine-grained control over when your fonts are loaded before rendering.